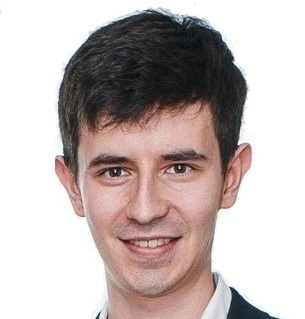 Maxim received his Bachelor’s and Master’s degrees from the Moscow Institute of Physics and Technology in 2010 and 2012. His Bachelor thesis addressed the problem of filling missing data values in the support vector machine classification framework. The Master thesis focused on the Gaussian processes regression and adaptive design of experiments. In 2012, Maxim started his postgraduate studies and switched the direction to the field of Mathematical Statistics. He concentrated on obtaining tight bounds for the Gaussian approximation of posterior distribution (Bernstein-von Mises phenomenon). The research resulted in a series of publications in peer-reviewed journals. It formed the core of Maxim’s Candidate of Sciences thesis defended at the Institute for Information Transmission Problems in January 2016.

Starting in 2010, Maxim also worked part-time as a research scientist in DATADVANCE Company, a Skolkovo Innovation Center resident. There he participated in developing the library of data analysis methods for engineering applications. This library, pSeven, is now used by many companies worldwide, including Airbus, Porsche, Mitsubishi, Toyota, Limagrain, and many others.

Also, I am actively involved in coordination and participation in program creation for Data Science and Information Science and Technology MSc programs and Computational and Data Science and Engineering PhD program at Skoltech (2016 – present)

Associate editor at Journal of Statistical Planning and Inference.