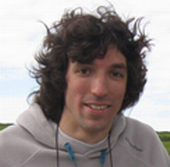 Georgii Bazykin graduated from the Biology Department of the Moscow State University in 2001. He obtained PhD in Ecology and Evolutionary Biology from Princeton University in 2007. Since 2007, he has headed the Sector of Molecular Evolution at the Kharkevitch Institute for Information Transmission Problems of the Russian Academy of Sciences (IITP RAS).

Prof. Bazykin’s research interests lie in the field of biological evolution at different levels. He focuses on disentangling the roles of natural selection and non-selective processes in evolution of genotypes, and on clarifying how genetic interactions shape the patterns of evolution and variation. He is particularly interested in evolution of immune system avoidance and drug resistance in pathogens, and in applications of evolutionary reasoning to medical genetics. His current major focus is genomic epidemiology of viruses, including SARS-CoV-2.

Georgii Bazykin has published over 50 peer-reviewed papers on a wide range of subjects in molecular evolution. He has received several awards, including the Outstanding scientist of the Russian Academy of Sciences Award of the Russian Science Support Foundation (2008); the Young scientist award of the Russian Club of the European Academy (2012); and the Deripaska award for the best work by gifted young scientists of the Moscow University (2014). He is an Editorial Board Member of Biology Letters, a Review editor in Frontiers in Genetics, a Recommender in PCI Evol Biol, and an Advisory board member in F1000 Research.

At Skoltech, Prof. Bazykin pursues a research agenda directed on understanding the constraints of evolution and causes of adaptation in a wide range of biological systems; on clarifying the factors of mutagenesis in germline and in cancer; and on understanding, predicting, and preventing drug resistance and immune system avoidance mutations in pathogens. He also leads the MS Program in Life Sciences in the position of program director.

Olga Vakhrusheva
Junior Research Scientist
Nothing in biology makes sense except in the light of evolution. This course introduces the fundamentals of evolutionary science as applied to genomics. It will allow to see how the basic population genetics processes create, maintain and affect variability in populations and lead to their changes with time. The focus will be on molecular evolution, i.e., the manifestation of these processes in genomes. As humans, we will be particularly interested in evolutionary aspects of medicine. The course assumes no prior familiarity with evolutionary biology, although knowledge of the basics of molecular biology and genetics is expected. The themes covered will include basic concepts in evolutionary biology and generalizations in evolutionary genomics; population genetics and factors of microevolution; and basics of quantitative genetics.